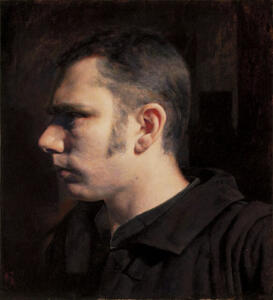 Michael Grimaldi is a Philadelphia-based visual artist whose work primarily focuses on monochrome paintings and drawings of the real and imagined. He has exhibited extensively throughout the US and abroad and has taught drawing, painting and anatomy for over twenty years at various institutions including the School of Visual Arts, National Academy, Pennsylvania Academy of the Fine Arts, and the Art Students League of New York. Currently, Grimaldi is the Director of the Departments of Drawing and Anatomy at the New York Academy of Art.

Michael Grimaldi studied painting and drawing at the New York Studio School, the National Academy, the Art Students League of New York and performed independent studies in anatomy and dissection at the Facultad Medicina in Buenos Aires and Drexel University College of Medicine in Philadelphia. Since 2009, he designed and taught an advanced anatomy course that is hosted by Drexel University College of Medicine in partners with the New York Academy of Art where art students are given the opportunity to directly study from human cadavers alongside medical students in Drexel’s Gross Anatomy Labs.

He has lectured on the relationship of art and science and his own work at numerous institutions including the Leon and Norma Hess Center for Science and Medicine, The Morgan Library & Museum, the Lyme Academy of Fine Art, Studio Incamminati, Drexel University College of Medicine, and the Institute of Classical Architecture.