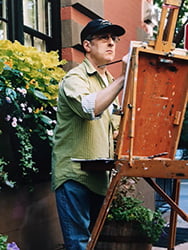 Richard Rosenblatt is a Brooklyn based New York native, whose father, David, was a noted WWII muralist.

He has studied at the Art Students League with Terrance Coyle, Hananaiah Harrari, and Frank Mason, as well as with David Rubin of the University of Alaska, and Laney College in Oakland, California, and more recently with Joe Paquet of St. Paul, Minnesota. Richard received his Graduate Gemologist certification from the Gemological Institute of America in 1985.

The recipient of a Pollock-Krasner award for painting, an Adolph Gottlieb foundation grant, and the Jack Richeson prize and President’s Award at the Salmagundi Club in NYC, Richard has traveled extensively in search of inspiration for his painting, in Europe, the U.K., West Africa, the United States and Canada.

He has been a resident artist at the Salmagundi Club in New York since 2010. His works are in numerous private collections throughout this country and Europe.

Richard is currently represented by the Simie Maryles Gallery in Provincetown, Massachusetts , and has been a regularly featured artist at the Garrison Art Center in Garrison, NY, since 1987 and the Salmagundi Club. He’s also been included in numerous exhibitions including the American Academy of Arts and Letters, and in Amsterdam at Arte Amicae, “The American Landscape”

​Richard resides in Bay Ridge, Brooklyn with his wife, the singer Adele Zane. When not painting he can also be found restoring rare books, and rocking as the drummer for the fabulous Prowlers.