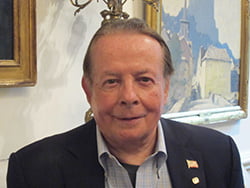 Roger Rossi became a Salmagundi member in 2007. Soon after, he became a member of the Art. Comm. and began our Auction Help Team. Roger was four years a Board member and as Corresponding Secretary began a Mentoring Program to welcome and congratulate all new members by phone helping them begin their memberships. He also serves on the Admissions and Collections/Archives committees. Roger is Chairman of the Auctions and expanded Social Media, now our source of Public Relations. He restarted our plein air programs now as “Salmagundians and their Friends” with four chapters plus two more for 2017.Roger continually attends the Plein Air Conventions, plein air destinations, and European trips with Fine Art Connoisseur bringing in many new members. Fellow members state that Roger brings the most new members to the Club. His continual contacts with our members would be an asset to the Nominating Committee.