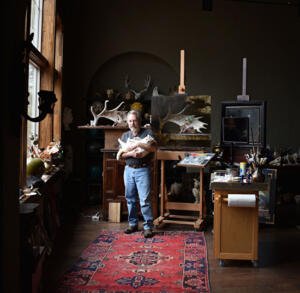 Jeffrey C. Legg was born in 1959 in Joplin, Missouri. He is recognized as a Master Signature Member by the prestigious Oil Painters of America. Legg’s luminous oils have garnered national recognition and numerous awards including the coveted Gold Medal at the OPA National Exhibition. Other major awards were earned at the American Impressionist Society, Virtuosos of OPA, Salon International and the Art Renewal Center Salon to name a few. Legg began his artistic journey at age 12, being mentored by a generous regional artist and college art professor in Southwest Missouri. He went on to study painting and drawing at Atelier Lack in Minneapolis, MN and the Minneapolis College of Art and Design. Legg has now been painting full-time for more than 30 years. His work has been featured in many books and publications including American Art Collector, The Artists Magazine, Art of the West, Southwest Art and has been on the covers of Southwest Art and Art of the West magazines. Legg is a member of the California Art Club, The American Impressionist Society, and the Salmagundi Club in NYC. His work can be seen in distinguished galleries across the United States and is highly sought after and collected in America and abroad.